In Praise of Perennials 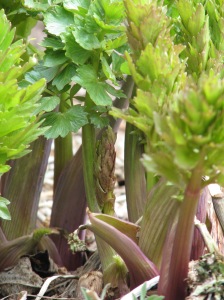 An abundance of lovage, which I haven’t figured out how to use.

I regularly lose control of the clock. Hours and even days seep away through pinholes and hairline cracks somewhere in my spacetime continuum.

Lately though, I appear to have lost control not only of the clock but also of the calendar. Whole months are getting away from me. On the Fourth of July weekend, I found myself finally transplanting petunias, pansies, and dianthus into the ceramic pots I keep on the decks in the summer—a chore I normally complete around Memorial Day.

I did manage to get some garden seeds in the ground before I left for an eight-day trip in early June, but the effort was rushed and I planted leftover seeds from old vintages because I hadn’t gotten around to ordering fresh seed in late winter or early spring. No calculated phased planting of cold-hardy crops, not this year. Six weeks later, I’m replanting rows of lettuce and carrots that failed to come up, and filling in other bald spots in the garden with leggy plants from the local nursery, top-heavy in their now-undersized plastic pots.

What’s funny, or odd, or interesting—or perhaps all three—is that in this early part of the summer, none of that matters. The first crops have come out of the garden right on schedule.

The chives poked up through the tangle of dead strands from last year right on time, starting in late April. I’ve been sprinkling little green hoops of minced leaves and the lavender florets from the blossoms over salads, sandwiches, and eggy scrambles ever since.

Spring asparagus, which keeps popping up all summer.

Spears of asparagus appeared in May. As with everything else in the garden (except the alpine strawberries, on which more in a moment), the asparagus bed is neither large nor prolific, but I pick a few spears every couple of days and either slice them raw on salads or store them until there’s enough to cook up a batch. The mix of skinny and fat stalks looks a little haphazard on the plate, but the asparagus is tender and delicious. 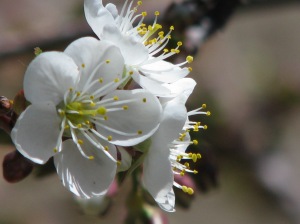 They won’t be ripening for a few weeks yet, but little green cherry beads have replaced the white blossoms of spring, and are dangling thick on the tree that’s been in the garden for years. The fruit is more scattered among the dense leaves of the new tree I planted two years ago, but there’s certainly more of it than last summer, when the tree yielded exactly three cherries. The birds got two of them; I plucked the third before it was quite ripe and ate it there in the garden with a defiant flourish, determined to get my share of the crop. Barring hail—and assuming I won’t be too distracted to get bird netting wrapped over the trees’ branches in time—we’ll soon be enjoying our annual tart cherry fix; between the two trees I should have a little fruit to stash in the freezer.

As to those strawberries: I started picking white alpine strawberries a handful at a time in mid-June, and now I’m picking them by the pint. The plants usually bear all summer, but I’m not seeing lots of new blossoms, so I wonder if the harvest will peter out early this year. I’ll be at peace if that’s the case, grateful that the early surge of strawberries has helped compensate for my delayed action in other parts of the garden.

I also started picking rhubarb weeks ago. Like the asparagus, the bundles I bring back to the house are anything but uniform; the stalks are long and short, thin and thick. Chopped up and simmered with a little brown sugar, however, the flavor is exactly as it should be: teetering from sweet to tart, the stalks creating a distinct category of fruitiness. Served warm with chilled yogurt, the compote is fit for dessert and breakfasts both, and I also substitute it for the mashed bananas in my Mom’s reliable banana bread recipe. When I started making rhubarb bread this way a couple of years ago, it promptly became my favorite quick bread. This weekend, the abundant strawberries joined the rhubarb in a flavorful crisp for dessert. With plenty left over for breakfast.

The rhubarb in April, edible stalks still just a promise.

That the perennials in the garden provide, regardless of whether I have my act together or not, is a matter of immense relief. I fully appreciate the seasonal rituals gardening imposes on my life, and it’s not that I’m trying to find a way to cheat the system. But when I lose control of time the way I have this year, it’s nice to have a scattering of the “homegrown” for the table.

And since I didn’t miss the planting window for the garden completely, the time-slip has meant that some of the quick growing crops are—Hey! Presto!—now ready. Tonight’s menu will feature homegrown rapini, sautéed with a little garlic and dressed with good olive oil. The last of the lettuce from the grocery store will be joined by leaves cut fresh from the garden in a salad that will, no doubt, be sprinkled with a generous handful of homegrown chives.