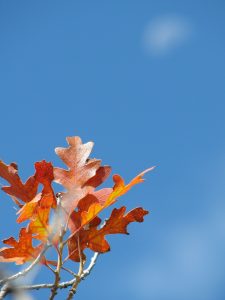 Talking to me about his business junket in late September, my husband described watching helplessly as one of his traveling companions, tripped up by someone’s luggage in an airport corridor, executed one of those multi-step forward stagger maneuvers. The fellow fought to regain his balance, throwing his legs out over and again, finally catching himself just before face-planting on a column.

We all probably know the feeling of that arms-akimbo head-first pitch. I could certainly picture it—got rather lost in the image, in fact, because I feel like I’ve been snatched up in one of those desperate lunges for weeks now. Each day feels like a slow-motion stumble, a flailing to arrest momentum and restore an upright posture, feet smacking down hard but ineffectually. I am dazed each day, puzzled at how I’ve been sent staggering by the ordinary navigations of life.

My current lack of equilibrium is due partly to the time of year. I love autumn, maybe even enough to say it’s my favorite time of year. On cue and true to form, the light has begun to seek that long low angle into my eyes, the nights have gotten crisp, we hear the odd bull elk bugling on the hillside below the house, and fall foliage is staging a fall fashion show. The grasses, currant bushes, scrub oak, aspens, and cottonwoods are each taking a turn, strutting out tweedy blends of yellow, rust, and fawn with accents of zippy orange and shocking scarlet. I never would have pictured you in that shade of burgundy, I think toward a clump of grass, but it looks good on you. 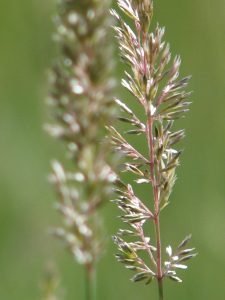 That’s all nice. But such moments quickly flash and fade in a year when “fall” seems to be more about bracing for an uncontrolled hard landing.

My momentum’s all wrong. I can’t quite let go of the frenzied pace of the long summer days. I’m looking forward to the indoor season, and external signals are telling me that it’s time to change gears, but my mind is still wheeling, churning over lists of chores that should be wrapped up before the snow flies or the ground freezes. Whether I scramble through the day knocking off tasks with cold efficiency or take it easy and try slow down and spoil myself, I feel the same at the end: exhausted and exasperated, wondering where the day went. I’m restless, but tire easily. Nothing seems to sync. For each external sign that, as the calendar says, autumn is arriving on schedule, there are others suggesting that the local landscape is suffering its own issues with equilibrium. Snow in August, hail at the beginning of September and then fog to usher it out. I’m seeing locoweed plants blooming, for a second time, in October.

There’s plenty to admire, but the kilter—the proper condition—seems absent. Hoping to avoid a senseless spiral of self-interest, I look at news from the larger world but there encounter grim stories of people clobbered by weather, rattled by earthquakes, murdered in bursts of violence.

Off kilter: I suspect we’re so much more familiar with the negative version of the term because the positive, the kilter, that proper condition, is inherently unstable. You can glimpse it while safely seated, but while afoot in life the odds are in favor of imbalance. The options for disequilibrium are infinite, while the parameters of balance are narrow. 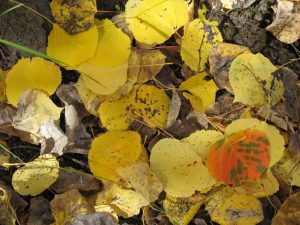 The fleetingness of what we deem proper is part of the charm, I suppose: we treasure what is rare, even though poise would soon stagnate. The future is in motion, and a proper condition is a dead zone, drained of potential, stripped of opportunity, absent innovative chance.

I can’t help wanting a pause, though, an interlude in which to catch my breath and count my bruises. Instead, I keep reeling, trying to work out how to take a deep breath within the sense of freefall.

6 Responses to Off Kilter